On putting together this blog I found out that the word ‘Craic’ (pronounced ‘crack’) is not actually Irish. It is a Scottish/Northern English word which means ‘having a laugh’. Crack also has other meanings, but I’ll leave that up to you to find out.

Cracks are inevitable in virtually all types of construction because of the kind of materials we use, the ways in which we use or misuse them and the service conditions that our buildings experience. But more about that later.

On a trip to the Hebrides some time ago I had a peek into an abandoned black house. It was a bit spooky, it looked like someone had left in a hurry; everything was left intact, including a made up bed.

People lived at one end of these houses and the animals lived at the other, with a partition between them. The walls were made from an inner and outer layer of unmortared stones, the gap between them filled with peat and earth. No cracks there then, but maybe a bit draughty, smelly and smokey as there was no chimney.

Few of us live in black houses nowadays. But modern buildings have their own problems, including the appearance of cracks.

Buildings and other built structures are moving all the time, but usually these movements are so small as to be unnoticeable. Movement can be caused by defects, movement of the ground, foundation failure, decay of the building fabric and so on.

If a structure is unable to accommodate this movement, cracking is likely to occur. The appearance of distortions and cracks can be visually unattractive and disconcerting for occupants, and if left untreated they can affect the integrity, safety and stability of the structure.

A BRE best-seller, Cracking in buildings, explains the science of materials behaviour. But what about human behaviour? Some of the main causes for poor construction practices and inadequate quality of buildings are given below: 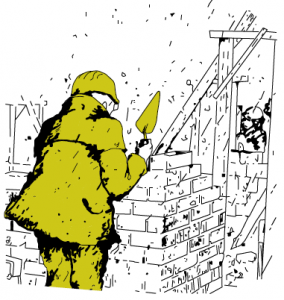 So that’s the craic about crack(s).