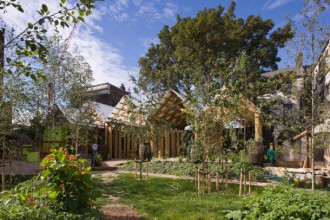 Once a derelict piece of land on the old Eastern Curve railway line, Dalston’s Eastern Curved Garden now lies as a beacon of tranquility in the middle of the vibrant East End.

Nestled just off Kingsland High Street, behind a heavy wooden door, is one acre of carefully tended, flower beds, trees and shrubs, including hazel, hawthorn and birch, planted alongside butterfly bushes, bracken and other plants that were already growing on the derelict site. The Garden also includes large raised beds and green houses for growing vegetables, including tomatoes, peppers and scented herbs.

The Garden offers a break to an unusual mix of people. You’ll likely see businessmen and women having lunch, groups of young families attending the craft workshops, and students and mid-twenties having a coffee, under the wooden pavilion, designed by architectural collective Exyzt.

Managed and maintained by volunteers, mainly residents of Dalston, the Garden runs daily craft workshops and gardening classes. In 2010, the garden won the Hackney Design Awards. The judges said “Every inch has a strong sense of community spirit.”

The Dalston Eastern Curve Garden’s entrance is located next to the Hackney Peace Carnival Mural, at 13 Dalston Lane, E8 3DF.