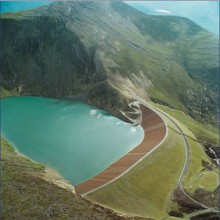 This is not a new concept, but definitely one still worth shouting about!

Situated within the Elidir Mountain in North Wales is Dinorwig, the largest pumped storage hydro-electric power station in Europe. Pumped storage enables the National Grid to store energy during times of low demand, and allows them to utilise this energy during peak demand periods. With more and more heavily polluting power plants being decommissioned, the generating capacity of the UK is reducing, making it difficult to generate enough electricity when people really need it. This makes pumped storage sites like Dinorwig even more important. Pumped storage works by using electrical energy to pump water from a reservoir at the bottom of the mountain to another reservoir at the top. When there is a high demand for electricity the water is released, allowing it to flow back down the mountain to the lower reservoir. On its way down the water passes through turbines, this in turn powers the generator to generate electricity for the grid.

Electric Mountain is open daily from 10:00 to 16:30. Tours are available on selected days, please contact Electric Mountain directly. Tour admission prices start from £4.35, but sadly it is not suitable for children aged under 4.