This modular show house was prefabricated off-site and brought to site for erection in four virtually complete, pre-fitted pods. The lower two pods sit on concrete pad foundations. The show house is designed to be highly resource efficient in terms of energy, water and waste prevention, both in its construction and when occupied. Operationally, it will require minimum energy input and maximises the use of renewable energy. The pods were assembled in Northern Ireland in factory conditions.

It is intended that the show house sets a standard which can be replicated as a model for low cost, lean construction house type, prefabricated off-site and therefore encourage resource efficient principles in housing design. It intended that the units will be relocated and as such the modules have been put together with the principles of ‘Deconstruction’ in mind, focusing on demounting and the use of a steel frame throughout.

The modular design and construction process allows for a very short on-site construction period, with minimal construction waste. The two ground level pods have steel beams built into their floor cassettes which are then spot welded to a steel grillage and stub columns, which are mechanically connected to the reinforced concrete pad foundations. The upper pods simply sit on the lower units and are held in place by their dead weight. There are no independent connections, thus making disassembly much simpler. The services were connected onsite along with the remaining internal fixtures and fittings installed. Table 1 shows the key elements used for the show house.

Table 1: The elements of the modular show house

An assessment was undertaken on the available design drawings to determine the potential for deconstruction based on the outline methodology. This involved looking at the following issues/criteria:

It should be noted that the show house was designed without the benefit of BIM or any allowance for a DfD methodology.

The procurement process for the show house was non-standard, as the project was awarded through a competition, instead of a traditional tender approach. Within this competition process, DfD was included as an overarching objective.

Overall Score Achieved – 69%. The radar graph shows the maximum weighted score available for each element with regards to the connections criteria and the current (actual) score. So for example, for the roof a maximum score of 12 could be obtained; however a score of 5 was awarded as there were a number of connections which would aid deconstruction. 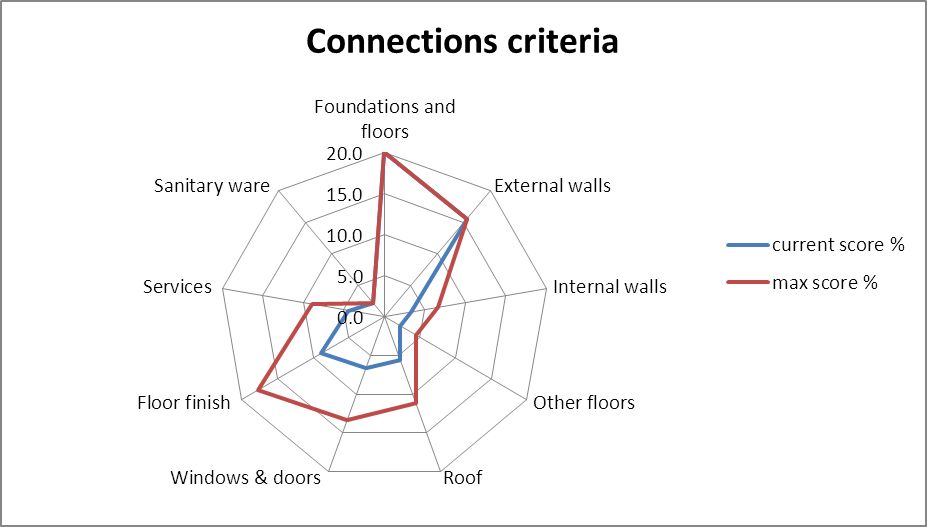 The 4 pods are constructed using SIP panels. Individual pods are delivered to site as whole units, with the pods stiffened with a partial steel frame. The ground beam grillage sits below the floor cassettes and is welded to steel stub columns as shown by Figure 1. The upper pods are not connected with the two base pods – these therefore score well for disassembly. Figure 2 shows the external wall of the pod with the timber cladding. Figure 3 shows the floor cassette. Both the mid-floor (Figure 4) and the ceiling construction are also made of insulated modular floor cassettes mechanically secured to the external SIP wall panels which will aid deconstruction.

A number of cladding types have been used. Larch timber cladding boards are mechanically fixed on to treated timber battens (details shown in Figure 5); these could be removed relatively easily. Lime render is applied to external wallboard as a secondary external material and stone cladding blocks have been fixed on to the SIP walls employing a proprietary cementitious mortar – this will present deconstruction issues in the future when it comes to removing the cladding blocks.

The mono pitch roof was partially site constructed from prefabricated trusses held in position with galvanised tie straps, using mechanical fixings. The single ply roofing is mechanically fixed using a manufacturer’s staple and fastening system to the substrate and then all the seams are hot welded. The weatherproof membrane system comprises a vapour control barrier, loose laid on to a 19mm thick OSP plywood deck which should be easily disassembled (See Figure 6).

The floor finishes include carpet tiles in circulation and bedroom areas, ceramic floor tiles in kitchen and bathrooms, tongue and grooved strip hardwood flooring in the living area. The carpet tiles are laid employing a semi-tack adhesives; these could be lifted up for reuse as could the hardwood flooring which is laid employing edge restraint and tacked through the joints. 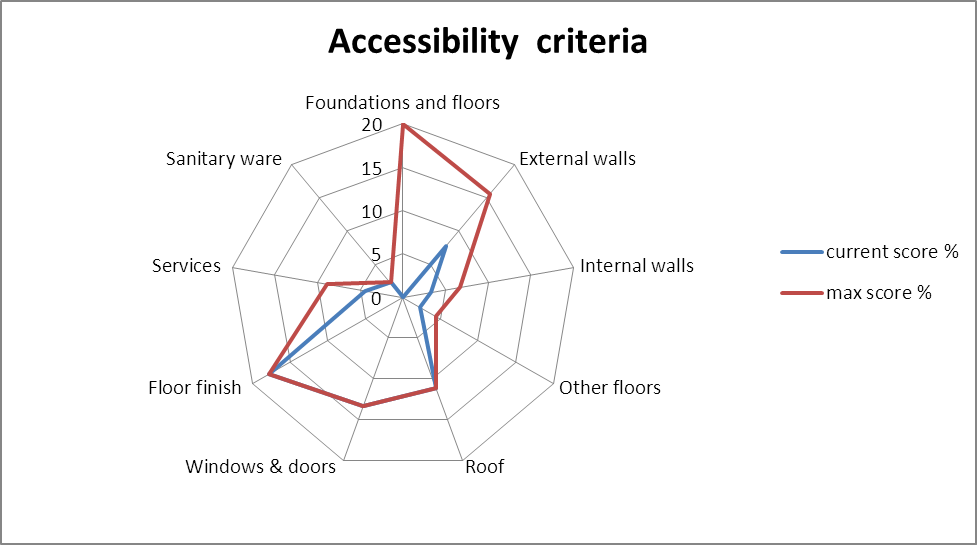 In terms of deconstruction the ground level pods have been constructed as semi-permanent units, with limited accessibility to be able to remove them from the ground level foundation steel grillage, as it has also been sprayed with temporary foam insulation, making access to the connections difficult.

The building has a Mechanical Ventilation and Heat Recovery (MVHR) system. The ductwork for the MVHR is integrated within the floor cassettes. Similarly, all the plumbing is concealed within the floor cassettes, with few surfaced mounted ductwork. A limited number of plumbing runs are surface mounted. Should leaks occur then maintenance could present access difficulties to ductwork and pipework, necessitating the removal of various finishes. The electrical towel rail in the bathroom and the night storage heaters are all accessible as is the hot water cylinder and the woodchip stove. The floor finishes, sanitary ware and windows and doors are fully accessible. 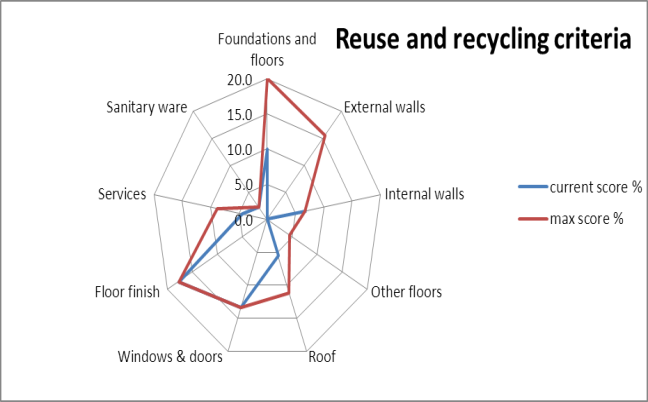 Key points for consideration are:

The building is designed to be demountable to allow the pods to be separated from each other and re-erected elsewhere. The key consideration for demounting of the pods is the need for specialised equipment for lifting and moving the pods.

Key considerations for deconstruction of the pods are:

The kitchen units are built in and are made of chipboard with a minimum of 70% recycled content and stainless steel handles. Recycling is possible, but the more likely route is to become a fuel source. The worktops are manufactured from recycled plastic coffee cups. All the wardrobe doors are ply faced painted and these could be successfully reused.The main staircase is constructed from second hand steel sections, with reclaimed steel balustrades. Both of these elements could be unbolted and reused.

The show house scored 66% overall for its DfD potential. Figure 7 shows the overall score by element.

The deconstruction process and connections criterion scored the highest and accessibility the lowest. The show house scored high in terms of the potential reuse of the pods as complete units. However it scored less well, if the pods were to be disassembled and the materials and components reused. Elements which had greater potential for DfD are the windows and doors, roof, floor finishes and sanitary ware. They are accessible and have a good reuse/recycling potential. Access is an issue for the ductwork which is mostly encased within the cassettes. The pods which are designed to be disconnected from each other and reused elsewhere, could present issues for deconstruction due to the spray foam covering the spot welding connections to the ground level steel grillage. The following issues are summarised: