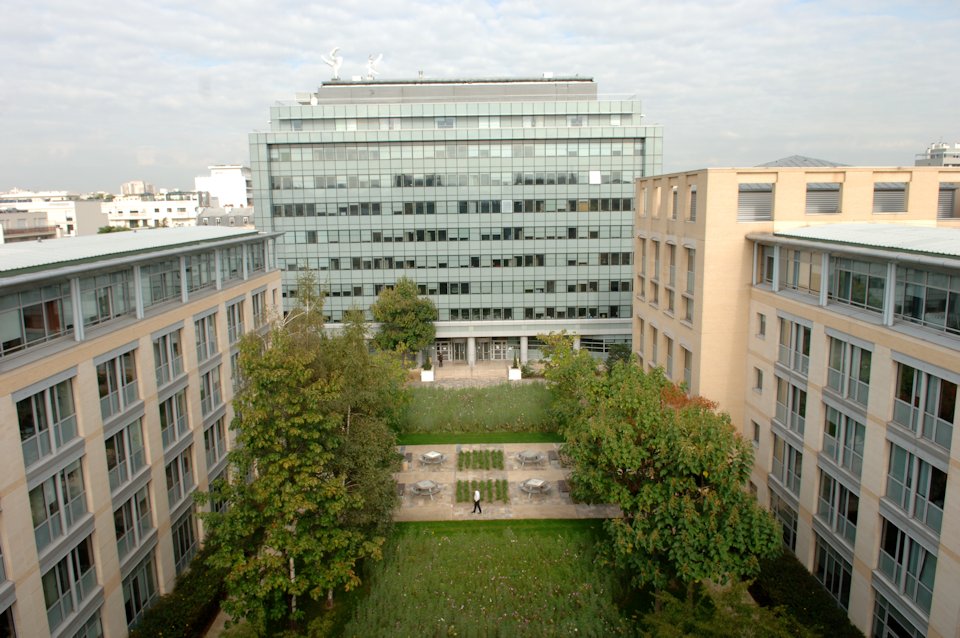 Carré Vert in the Levallois-Perret area of Paris has undergone an extraordinary transformation in recent years. It is a large and prestigious office complex, but was once unremarkable in terms of its sustainability performance – that is most certainly not the case today.
Carré Vert is the first building in the world to achieve a rating of Outstanding under BREEAM New Construction, and then to go on to achieve the same rating under BREEAM In-Use. Its success in the design and construction aspects of BREEAM and now in management and operation relies on a close partnership between the building’s owner, Wereldhave, tenants Electricité de France (EDF) and their advisors Greenaffair.
Carré Vert consists of five building units of varying age, the oldest one a former chocolate factory. Developed by Wereldhave in 1999, it now has a campus appearance with one central eight-storey unit facing three four-storey units linked together and surrounding a central garden.
Wereldhave undertook a major refurbishment of the building in 2009, an important target of which was improved sustainability. To help achieve that, the project underwent a BREEAM assessment (under the BREEAM Europe Commercial 2009: Offices scheme) and initially gained a ‘Good’ rating at the design stage. That was an impressive performance for a building refurbishment, but Wereldhave had higher ambitions.
The opportunity to fulfil these came with the subsequent fit-out of the building for EDF, the (then) new tenant. EDF were equally keen to develop the building into something special, and the partnership between owner and tenant culminated with Carré Vert being awarded the highest BREEAM rating of ‘Outstanding’. This gave it the distinction of being one of the first office buildings to be awarded ‘Outstanding’ at the post-construction stage.
When discussing this project the CEO of Wereldhave Dirk Anbeek said, “We are actively pursuing a sustainable offices portfolio in Paris. Reaching the ‘Outstanding’ level for an existing property is not only a unique achievement, but it is also only possible in a joint effort between tenant and landlord. We are very happy that EDF wanted to team up with us. It shows their active engagement to sustainability, as well as their commitment to our property.”
EDF shares this enthusiasm for the partnership, according to its Executive Director for EDF Corporate Real Estate Division Nathalie Charles. “EDF is committed to minimise the environmental impacts of all its activities and to be exemplar in its buildings use, which is a continuous effort,” she said. “Thus we were very happy to find in Wereldhave a landlord with similar ambitions.”
Their programme of enhancements encompassed virtually every aspect of the building, from improving the airtightness, insulation, acoustics and waterproofing of the fabric, to installing cycle racks and electric recharging facilities for cars. 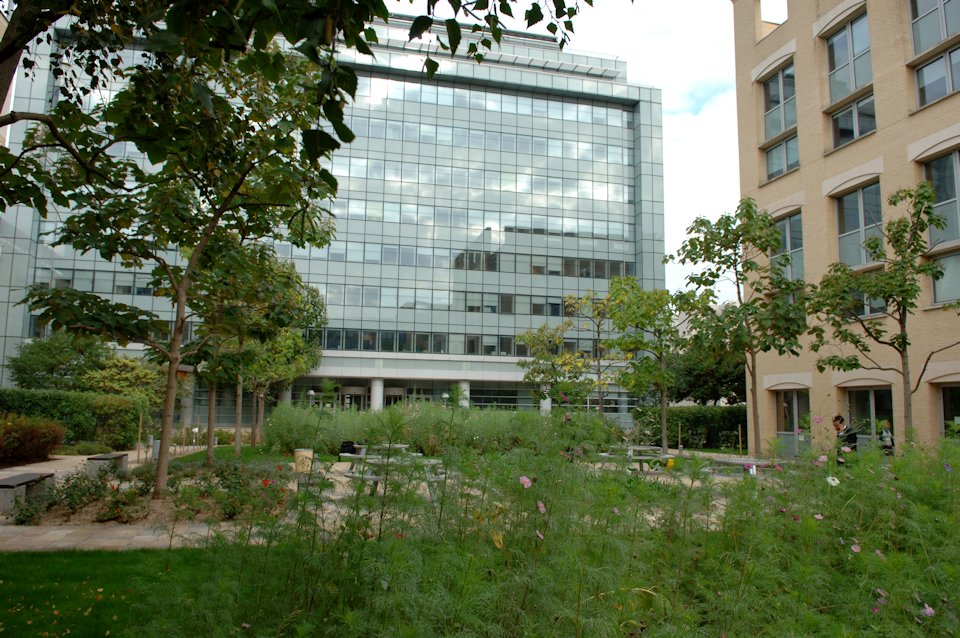 The building services highlights include replacing of the traditional cooling systems with two geothermal heat pumps that pass air into the building through a cooled water loop. The BMS has been upgraded and adapted to more efficiently and cost-effectively meet the building’s heating, cooling, air quality and other needs. A new central ventilation system delivers a ventilation rate of more than 36m3/h/occ to the offices, which are fitted with CO2 detectors.
Electricity is generated with 400 m² solar panels and two urban wind turbines, while solar thermal panels provide hot water for the restaurant. There is a rainwater capture and storage system, and an on-site water treatment and reuse system provides water for the toilets and the garden’s fountain. But this project has gone beyond integrating these and other technologies into the building to improve environmental and economic performance.
Through a strong focus on user wellbeing it has sought, for example, to enhance the occupants’ awareness of the changing seasons, weather and light intensities – and to provide colour and water movement in the garden – so that the building users, “while working in dense urban areas, will remain connected to the basic rhythms of nature”.
The project’s success in developing a building that now showcases exemplary sustainability in the broadest sense, can be largely attributed to the dynamic and proactive team driving it. As well as EDF and Wereldhave, this comprises other stakeholders and users including the BREEAM assessors Greenaffair, the architect and contractors. Their legacy is building in which virtually everybody is concerned with sustainability. It is perhaps not surprising therefore that they were soon ready for the next step – BREEAM In-Use.
Moving smoothly onto BREEAM In-Use
Carré Vert’s earlier assessment had involved a BREEAM scheme that examines the sustainability of new buildings and major refurbishments. BREEAM In-Use was the logical next step because it is concerned with the on-going performance of existing buildings. Since its launch in 2009, the scheme has enjoyed excellent uptake in a number of European countries. The take-up in France is particularly high and growing quickly.
BREEAM In-Use is an assessment and certification scheme designed to help building owners and occupiers measure and cost effectively reduce environmental impacts. The assessment process is broken down into three parts – one, two or all three of which can be undertaken. Tackling all three – as in the case of Carré Vert – gives a comprehensive picture of the buildings asset’s overall environmental performance.
The three BREEAM In-Use assessment parts are:
Part 1 – Asset: the performance of the asset
Part 2 – Building Management: the management of the asset
Part 3 – Occupier Management: the management of building users and services.
BREEAM In-Use gives buildings that initially have a low overall assessment score the opportunity to make future year on year improvements, while buildings with high initial scores – such as Carré Vert – can strive to maintain their rating by making on-going improvements.
As well providing specific performance data about the building in question, the scheme also presents normalised data about its environmental performance. This enables level-playing-field comparisons to be made with the performances of other buildings in an organisation’s portfolio and elsewhere, a feature that Wereldhave has highlighted. “Wereldhave chose BREEAM because of its international exposure and to evaluate our worldwide portfolio on the same basis,” says Damien Liot of Wereldhave NV France.
The outcomes of the BREEAM In-Use assessment of Carré Vert are:
Part 1 Asset: Outstanding
Part 2 Building Management: Outstanding
Part 3 Occupier Management: Excellent
These remarkable results give Carré Vert the unique distinction of being the first building to ever achieve ‘Outstanding’ ratings in both BREEAM for new construction and BREEAM In-Use.
The earlier BREEAM Outstanding achievement provided an excellent basis on which to set the targets needed to gain equally impressive in-use results. BREEAM In-Use is designed to build on internal review processes to achieve optimal results in building performance and management – this was an important element in the approach at Carré Vert.
Wereldhave and EDF co-operated closely on key issues such as the development of targets for energy and water use – and the strategies for meeting them, including the installation of LED lighting and the upgrading of sanitary systems. Other agreements covered wide ranging aspects of the management and operation of the building, down to the sourcing new carpets. In addition the contracts for companies providing services to the building – such as that for maintaining the garden – all include elements designed to enhance sustainability.
The team at Carré Vert recognises that this is an on-going process. It will continue to meet regularly to monitor and improve sustainability performance and targets. The aim will be to both maintain the very high standards already achieved and, in time, to add an ‘Outstanding rating’ for BREEAM In-use Part 3, to those for Parts 1 and 2.
“BREEAM certification is a requisite to keep our properties competitive and sustainable whilst ensuring the durability of the tenant in the premises,” said Michel Janet, Managing Director, Wereldhave NV France.